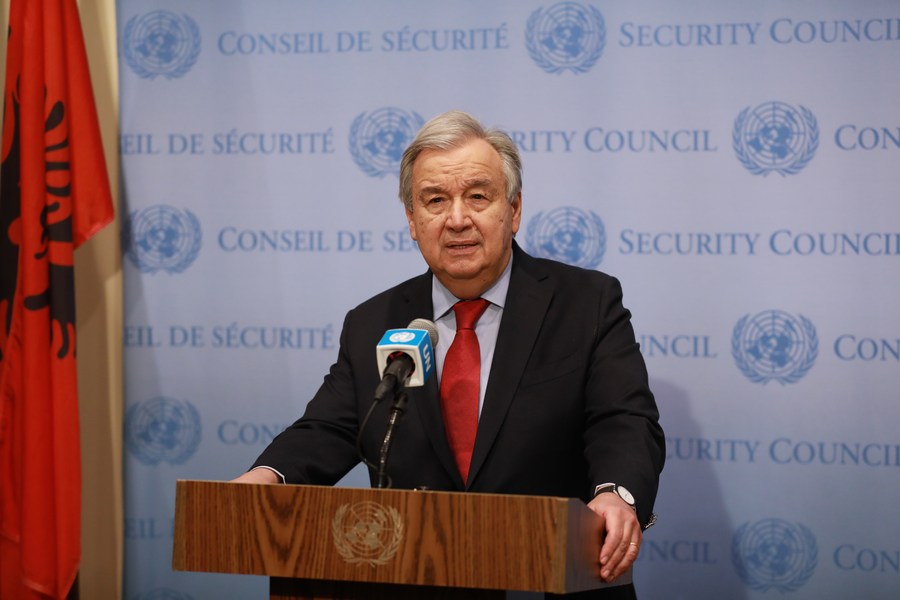 The cargo ship loaded with more than 26,000 tons of corn should arrive at the inspection location in Turkish territorial waters on Tuesday. Following inspection, it will proceed to its final destination in Tripoli, Lebanon, said Guterres.

"This ship, the Merchant Vessel Razoni, is loaded with two commodities in short supply: corn, and hope. Hope for millions of people around the world who depend on the smooth running of Ukraine's ports to feed their families," he told reporters.

The ship's departure is the first concrete result of the Black Sea Grain Initiative. "Today's departure is an enormous collective achievement by the Joint Coordination Center, set up last week in Istanbul under UN auspices, with representatives from Ukraine, Russia, and T©╣rkiye," Guterres said.

The Black Sea Grain Initiative, signed by Russia and Ukraine with T©╣rkiye under the UN on July 22, would allow significant volumes of food and fertilizer exports from three key Ukrainian ports in the Black Sea, namely Odesa, Chernomorsk and Yuzhny.

The deal aims to ensure the safe passage for ships carrying grain to world markets amid concerns about food shortages due to the prolonged crisis in Ukraine. 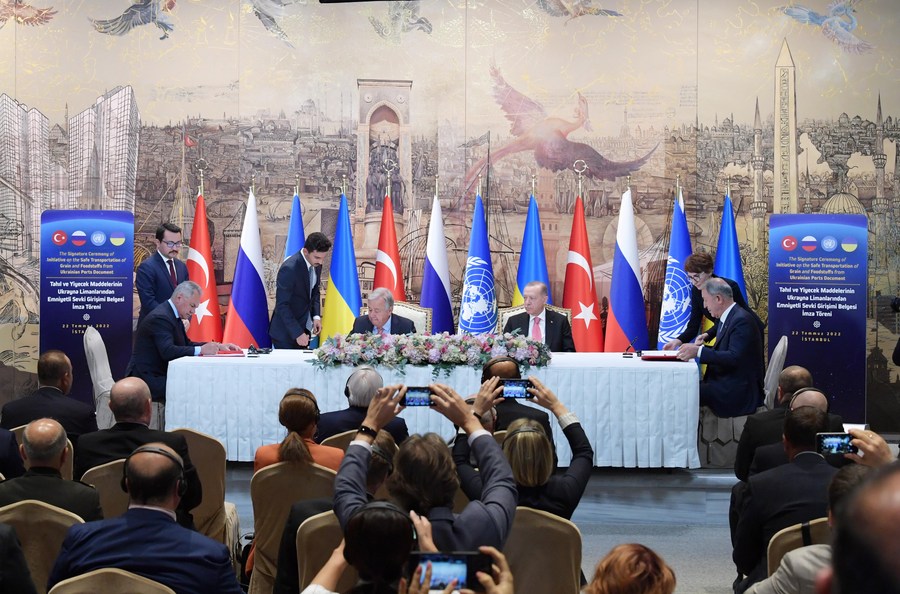 "What we've witnessed today in Odesa is an important starting point. It must be the first of many commercial ships bringing relief and stability to global food markets," said Guterres.

"Together with the agreed facilitation of the unimpeded access of Russian food products and fertilizers to world markets, it will bring relief and stability to global food markets and help tackle the global food crisis," he added.

In line with the humanitarian spirit of the initiative, the World Food Programme is planning to purchase, load and ship an initial 30,000 metric tons of wheat out of Ukraine on a UN-chartered vessel, said the UN chief.

The conflict in Ukraine must end, and peace must be established, in line with the UN Charter and international law, he said. "I hope today's news can be a step toward that goal, for the people of Ukraine and the Russian Federation, and for the world." 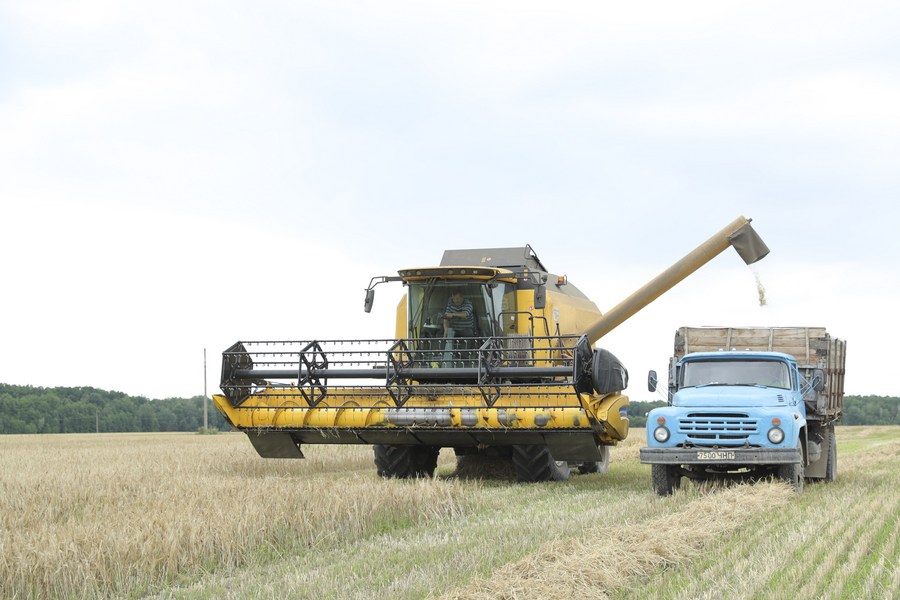 A harvester operates at a farm in Chernihiv, Ukraine, July 30, 2022. (Xinhua/Li Dongxu)

While this tragic conflict continues to rage, the United Nations is working every day to bring relief to the people of Ukraine, and to those suffering the effects of the conflict around the world, he said.

The parties to the initiative have worked tirelessly to reach this milestone, with the support of the United Nations and T©╣rkiye, he noted.

"After speaking to my colleagues, I know they worked practically all night, sleeping for just one hour -- like all the other delegations at the Joint Coordination Center (in Istanbul). It is thanks to their commitment that the Razoni was able to leave Odesa safely. I salute their efforts, and I am grateful to T©╣rkiye for its leadership," he said.

In a press release, the Joint Coordination Center (JCC), which was established under the Black Sea Grain Initiative, affirmed that it has authorized the Razoni to sail from Odesa.

"The JCC has agreed to the specific coordinates and restrictions of the Safe Humanitarian Maritime Corridor and has communicated those details in accordance with international navigation procedures. The JCC has requested all its participants to inform their respective military and other relevant authorities of this decision to ensure the safe passage of the vessel," it said.

The JCC is monitoring the safe passage of the vessel through the Safe Humanitarian Maritime Corridor, it added.

The JCC comprises senior representatives from Ukraine, Russia, T©╣rkiye and the United Nations.