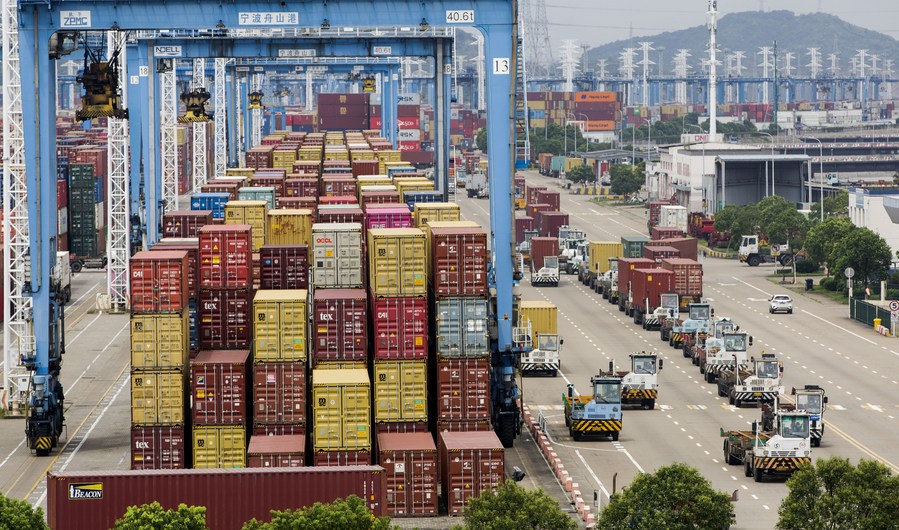 On the shop floor of Shaoxing's Buting textile company in east China's Zhejiang province, processing and manufacturing machines are humming around the clock. Container trucks loaded with colorful textile fabrics are ready to depart for the Ningbo-Zhoushan port, one of the world's busiest ports in terms of cargo throughput.

Located at Shaoxing's Keqiao District, a global textile distribution center, the company has managed to keep an upward momentum in production and sales after a pause caused by the COVID-19 pandemic.

By sticking to a dynamic zero-COVID policy, China has largely put the latest waves of the pandemic under control. And manufacturers in the country have rebooted their on-site operation.

The company's performance is surely impressive. So is the country's economic resilience, which is reflected in the bouncing-back in the second quarter this year. It has proved once again that the Chinese economy, guided by "Xiconomics," the economic thought of Chinese President Xi Jinping, has flexibility and potential to forge ahead in an age of intertwined headwinds and uncertainties.

China's National Bureau of Statistics showed Friday that the country's GDP has secured positive growth in the second quarter and expanded 2.5 percent in the first half of the year.

Such an economic report card did not come easily. It was made amid a combination of tough challenges brought about by the lingering pandemic, simmering global geopolitical tensions and the staggering world economy. 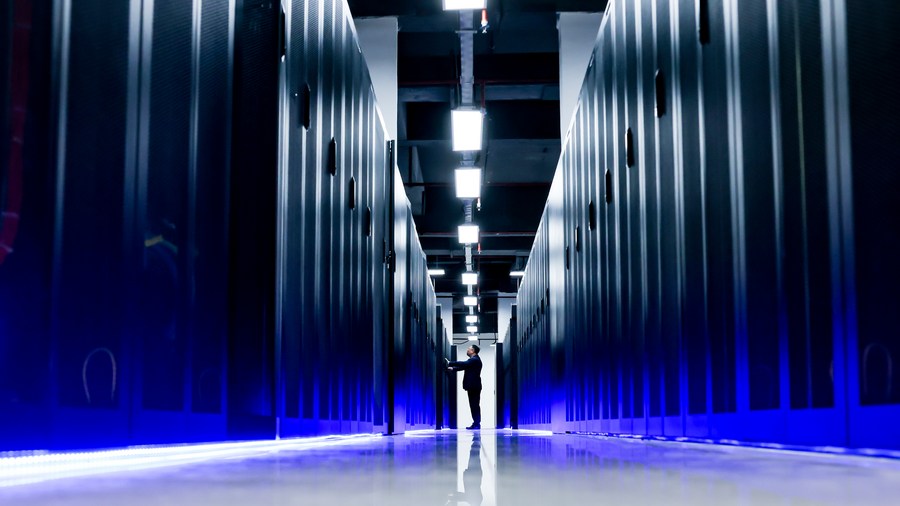 In December, the tone-setting Central Economic Work Conference stressed the importance of maintaining stability while pursuing progress in 2022, and called for efforts to consolidate the economic foundations, enhance scientific and technological innovation, deepen reform via high-level opening-up, and boost high-quality development.

In response to multiple unexpected factors this year, the Chinese government has managed to follow the guideline of the meeting, and adopted in May a raft of targeted and vigorous measures, including raising tax refunds, smoothing logistics and transportation, boosting consumer spending and investment and safeguarding production, in order to stabilize economic performance and get the economy back to normal.

Thanks to those timely measures, China's economy saw a steady recovery amid the increasingly complicated global environment, demonstrating its strong resilience and ample potential for long-term development.

In June, the country's retail sales of consumer goods registered a year-on-year increase of 3.1 percent following drops in April and May, foreign trade picked up to 14.3 percent, and the value-added industrial output rose 3.9 percent year on year, up from a 0.7 percent gain in May. Meanwhile, China has successfully kept its consumer prices stable against the background of surging inflations in several major economies.

Over the years, the Chinese government has effectively responded to various unanticipated challenges through stable long-term macro planning as well as flexible and pragmatic micro policy adjustments, which has ensured the stability of economic fundamentals and achieved a sustainable growth, said Charles Onunaiju, director of the Abuja-based Center for China Studies in Nigeria.

"When you have the basic fundamentals put in place, it is easy to absorb shocks, especially unforeseen ones," he said.

For decades, China has maintained a major driving force of global economic growth. Since the onset of the pandemic, it has been stepping up efforts in stimulating domestic consumption, stabilizing industrial and supply chains and introducing more measures for wider opening-up. Its role in an integrated global economy has grown even more significant.

Trade has long been a key force to energize the global economy, and to electrify greater common development worldwide. China, a staunch champion of global trade and an open world economy, has maintained its position as the world's largest trading nation in goods for many years. In the first half of this year, China's trade with its top three trading partners -- the Association of Southeast Asian Nations, the European Union and the United States -- expanded by 10.6 percent, 7.5 percent and 11.7 percent respectively on an annual basis.

To help stabilize global supply chains rocked by the pandemic, many cities in China have offered more transportation services, and launched new direct air and sea routes to facilitate cross-border flow of people and goods, giving a strong boost to international trade and global recovery.

Take the recently launched container shipping line from Dongguan, a manufacturing hub in China's Guangdong province, to Britain's metropolitan Liverpool. The whole journey only takes 28 days, and is at the moment the fastest shipping line from south China to Europe.

China-Europe freight trains, launched in 2011, have also been playing a notable role in bolstering global trade, especially after the outbreak of the pandemic. On July 11, a freight train loaded with electronic products, mechanical parts and daily necessities arrived in Duisburg. It marked the 10,000th trip made by the trans-continental trade service operated by the China-Europe Railway Express (Chongqing). 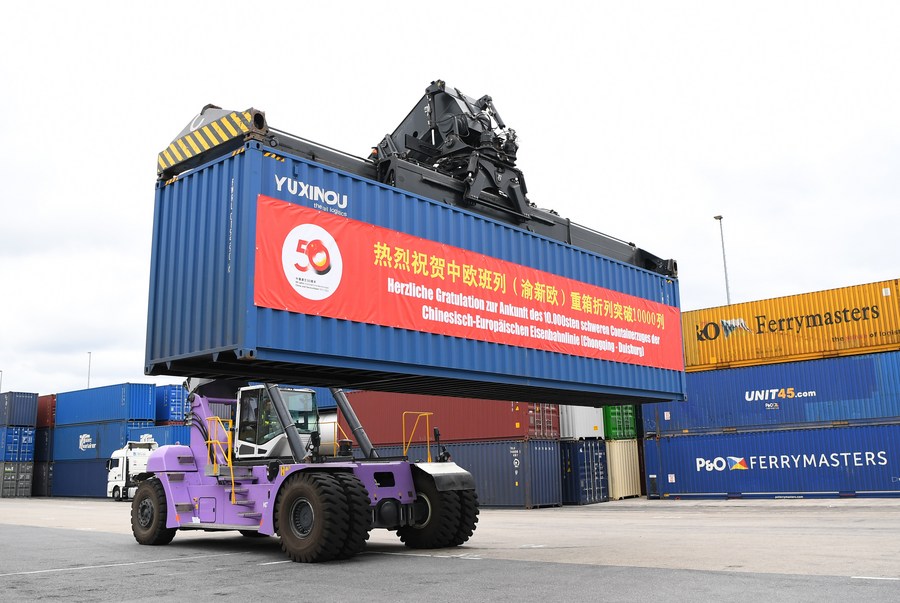 Photo taken on July 11, 2022 shows a scene from the welcome ceremony for the 10,000th trip made by China-Europe freight trains operated by the China-Europe Railway Express (Chongqing) in Duisburg, Germany. (Xinhua/Ren Pengfei)

While the freight trains have opened a door for Chinese firms to tap business opportunities in Europe, they have also brought real benefits for local economies. Duisport CEO Markus Bangen told Xinhua that the cooperation between Germany and China is mutually beneficial and he looks forward to widened bilateral cooperation.

"The stronger China's economic development is, the more countries that have trade and economic cooperation with China will benefit," said Anna Malindog-Uy, a researcher of Philippine-BRICS Strategic Studies, a think tank.

Agustin Carstens, general manager of the Bank for International Settlements, said in a recent interview with Xinhua that the world economy under severe shocks needs China.

China has been an engine of global growth for quite some decades, he said. "I think it's important for that to be preserved."

China attracted an increasing number of international investors in the past decades with a super-sized domestic market, a complete industrial chain, a favorable business environment, strong policy support for the real economy, as well as continuous efforts to opening-up.

With growing understanding of the fact that the fundamentals of the Chinese economy remain unchanged, foreign firms have remained confident in China's development. Many of them have chosen to maintain or expand businesses in the world's second largest consumption market. Noel Quinn, group chief executive of HSBC, told Xinhua earlier that the financial institution expects to invest more than 3 billion yuan (440 million dollars) in China between 2020 and 2025.

Figures from China's Ministry of Commerce showed that in the first five months, foreign direct investment into the Chinese mainland, in actual use, expanded 17.3 percent from a year earlier.

In Onunaiju's view, China's pledge to continue optimizing the investment environment and opening up its market will help bolster the confidence of foreign investors and stabilize the expectations of international trade partners.

Malindog-Uy at the Philippine-BRICS Strategic Studies said she believes that China will continue to attract foreign investment in the future given its market size, rapid development of high-tech, competent labor resources as well as the relatively modern economic system.

"These positive factors will provide room and momentum for the continued recovery and growth of the Chinese economy in the future," she said.